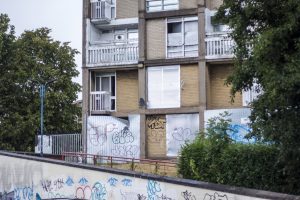 As part of our research into British social documentary photography, we travelled to Sheffield to visit the exhibition Love Among the Ruins. The exhibition presented works by photographers Roger Mayne and Bill Stephenson, who photographed the first residents of Park Hill between 1961 and 1965, and the last residents of Hyde Park in 1988, respectively. The site of the exhibition, S1 Artspace, now occupies a central place within the newly developed Park Hill complex.

Mayne’s photographs (1961-1965) documented how the residents were adapting to high rise living on the newly developed Park Hill estate. In contrast, Stephenson’s photographs taken in 1988, showed the decline of the estate after it had fallen into disrepair. The photographs were presented alongside rare documents and archival material relating to the site, as well as a film about Park Hill produced by the BBC in 1965.

The Park Hill redevelopment scheme was originally commissioned in 1956, as a radical solution to the post-war housing crisis. However, by 1967 concerns were being raised about the impact of high-density housing, and the site gradually fell into decline through neglect by the local authorities. This led to the partial demolition of the complex between 1991 and 1993, and residents were encouraged to transfer to other properties. Despite this, many residents felt a sense of community within the flats and did not want to be rehoused.

In 1998 Park Hill gained Grade II* listing status and was purchased and later redeveloped by the private company Urban Splash to house young professionals in the city. To market the new development, Urban Splash produced an illuminated neon sign of iconic grafitti from the site. The graffiti, which spells out I LOVE YOU WILL YOU MARRY ME? is written on the bridge between two of the tower blocks. The graffiti has also been recreated in Urban Splash’s sales office within the tower blocks as well as promotional merchandise.

However, the appropriation of the former culture of the site has been deemed by some as distasteful, due to the background story of the graffiti. This is explored further in Changing the meaning of place: a rebranding case study of Park Hill Flats, Sheffield by Juliet Rowson. Here, Rowson argues that developers were keen to co-opt previous meanings of communities and family within the site through messages such as ‘Streets in the sky’ and ‘I love you will you marry me’ as decontextualised slogans, as this enabled them to sell flats in the development.