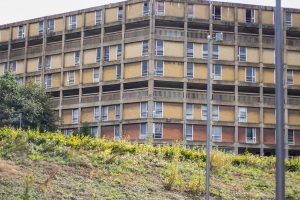 This project is a collaboration between two Leeds-based visual artists, Victoria Kortekaas and Louise Atkinson. It developed from Victoria’s recent experiences of living in high rise social housing and her photographic explorations of the place where she lived. It also built on her previous photographic projects around working class representations and the social stigmas which often arise from these. Through conversations, and drawing on our previous arts education work in deprived areas, we decided to develop a project which involved working with people living in high rise and social housing to co-produce new artworks around ideas of representation.

We aim to facilitate people to develop their artistic and transferable skills, and to support them in telling and sharing their own stories and experiences. Including people in the process of creating art is important to us, as we believe that this can have a positive impact on people’s lives through increasing self-esteem, and reducing social isolation. Through partnering with existing organisations as part of the local infrastructure, we aim to introduce new ways of working with people and to leave a legacy that can be facilitated by organisations but led by the participants.

Although our project originally began in response to the relationship between high rise living and social isolation, it has quickly developed into a wider conversation about social housing in general. Our aim is to begin with a pilot project in Lincoln Green, and then present this as a case study for further projects in the local area and further afield.